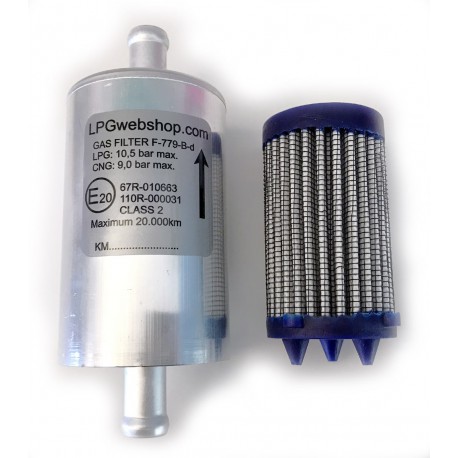 Replacement period:
The filter lasts a maximum of 20,000 km. Preferably replace the filter earlier.
This replacement period applies with an average engine capacity of approximately 1.8L. Larger engines use more gas, which means the gas filter needs to be replaced sooner.
It is also possible that the LPG contains a lot of contamination (with oil and fats) at some refueling, which means that it is necessary to replace the filter earlier. Take this into account.
The timely replacement of the gas filter is necessary to prevent contamination of the gas system and gas injectors.


Background information regarding problem with gas injectors:
In most cases, the problem is caused by the injectors being contaminated with paraffin (oils and fats from the LPG). The filter in front of the injectors must ensure that the injectors do not get dirty quickly. This filter will eventually become saturated and must be replaced in time. If the filter is not replaced, the paraffin will no longer be captured and end up in the injectors.
It is not the case that the injectors leak or stop opening. But the opening and closing times are no longer correct. The injectors remain open longer than they should (with dynamic behavior), so that too much fuel is dosed. (too rich mixture = high CO)
The injectors will then deviate, especially with short injection times (low engine load). The engine starts messy and there are too large differences between the injectors. Cleaning the injectors often makes no sense, because there is often too much wear in the injector, as a result of which the guide of the plunger (sealing disk) no longer has the correct fit. The plunger no longer goes up and down smoothly, but that is faltering and wobbling.
If the injectors are replaced without replacing the filter, the new injectors will quickly become dirty again. (read symptom relief, no long-term solution)